Marking aluminum is one of the most common applications for a fiber laser marking system. There are a few techniques that can enhance the appearance of the finished, marked product.

Both uncoated and coated aluminum substrates can be made to yield attractive marks with a fiber laser. Aluminum coatings are usually in the form of anodize or chemical film conversion coatings such as Iridite or Alodine. In all cases, laser marking removes the coating on the aluminum by vaporizing it away. The chemistry that affects the surface of the aluminum after marking is poorly understood although it is generally accepted that a naturally occurring oxide forms on the exposed surface of the aluminum substrate after marking.

In general, there are three types of laser marks that can be performed on aluminum:

When the coating on aluminum is vaporized away, the base material is exposed and the laser textures the surface such that scattering of reflected light gives the appearance of a stark, white mark. The same is true when marking bare aluminum. Type II anodize has a thickness of only .0003 inches or so and can be ablated away without any noticeable penetration into the substrate.

If a dark dye has been used in the anodizing process, the marking contrast is excellent….a stark white mark on a dark background. In the case of clear anodize, light colored anodize or chem film coating, the white mark on a light colored background provides a much more subtle appearance. After marking, an oxide layer will form naturally on the exposed surface and this provides some level of protection to the marked area.

Ablation marking on aluminum can be performed relatively quickly. I like making two laser passes on these material types. The first laser pass is a “damage” pass at 12-15 watts and 25-30 inches/second marking speed to ablate away the chem film or anodize. The second laser pass is a “cleanup pass” at 10 watts or so of laser power and 30-35 inches/second marking speed to brighten up the marked area. If a white mark on a light background looks too subtle then there are some things that can be done to increase contrast. If a solution such as Aluma Black from Birchwood Casey is applied, the marked area will turn dark. The anodize or chem film will protect the unmarked areas from the darkening solution and so, this process cannot be used on bare aluminum.

There are some tricks to proper application and removal of the darkening solution in order to get a good looking end result. A dark looking mark can also be accomplished by playing with laser settings. Lowering the marking speed substantially and increasing the laser power can roughen up the surface enough to make the mark look darker and with subsequent handling, the mark retains it’s dark appearance. 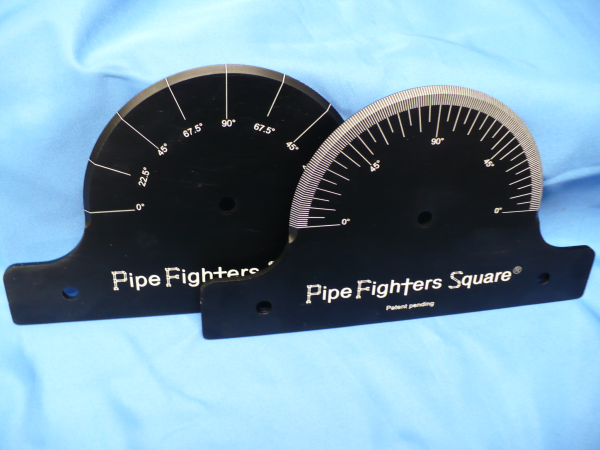 A coating of hard anodize will be many times thicker than type II anodize. The anodize will penetrate the substrate as much as it builds up the surface. The result is a durable, ceramic like surface. Laser marking hard anodized parts can be challenging and difficult. We like to use our 50 watt lasers for hard anodize marking although with more laser passes and slower marking speeds, it can be accomplished with a 20 watt laser.

We will typically increase our fill density in the marking objects to .001 inches and then make multiple passes at a relatively high speed, say 25 inches per second or so, using relatively high laser power, say 40 watts or so. With hard anodize we still use the damage and cleanup pass technique but the cleanup pass rarely gives the same bright white final appearance that is achieved when marking Type II anodized surfaces.

Laser marking aluminum with a fiber laser gives you lots of opportunity to make unique and interesting permanent marks but it also requires an understanding of the marking system and the material. With 30+ years of aluminum laser marking experience, Jimani can help you create the look and feel you need to make your aluminum parts as attractive as they can be.

Contact us if you would like to talk about laser marking systems or job shop services for your aluminum parts.