A few months ago we did some space reorganization at Jimani, and I found that I could open up a rather large section of floor space. As I was pondering how best to use that space, I coincidentally received a flyer about a fiber laser cutting machine. The machine was a 3KW IPG Laser Cube, and it was being demonstrated at a laser cutting shop in Anaheim, CA, Sierra Laser. I decided to make the 70 mile drive to Anaheim and look at it.

I have often thought that laser cutting of metal is a natural extension of laser marking and engraving metal, but I was always concerned about the size, cost and operational complexities of the cutting lasers that I have seen over the years. The Laser Cube struck me as being a little different and maybe better suited to Jimani’s style of business. I pretty much made up my mind on the spot that I would stick my neck out and buy one even though did we not have any cutting business in our job shop. I have spent the last 20 years telling people that we don’t do laser cutting when we were asked about it.

Westec 2017 was going to take place in LA in a few weeks after I saw the Laser Cube in Anaheim and IPG was going to have a 3KW Laser Cube at the show. I gave them a conditional PO for the machine that would be at the show. The price was attractive, and IPG was willing to toss in or discount some additional features that would be on the show system and, additioanlly, pick up the entire freight charges up to Jimani’s back door. I made it clear that at any time before the show or during the show, I had the right to back out. They didn’t ask for money up front and were OK with a conditional PO and a handshake.

I spent the next few weeks before Westec trying to learn as much as I could about the laser cutting business. I also spoke with a few local companies that do laser cutting and are also Jimani vendors and/or customers. I didn’t want to surprise anyone or create ill will. I made it clear that I was hoping to create new business, not tap into their existing business. I didn’t get overwhelming encouragement from either those folks or my own employees. Although the words were never spoken, I think that all of them wanted to say, “Jim, you should be thinking about retiring rather than starting a new type of business.”

Well, I’m not even close to thinking about retirement, and I don’t mind gambling a bit. I bought the machine at the show, and it is now operational at Jimani. We have spent the last month getting it set up and dealing with things that I never had to worry about before. These challenges have included getting set up with assist gasses, improving our fume extraction capacity, identifying a primary machine operator and finding his replacement at Jimani. In addition to those things, I have been learning where and how to buy metal (got to practice on something), how to use the machine controls and, most importantly, how to cut metal. 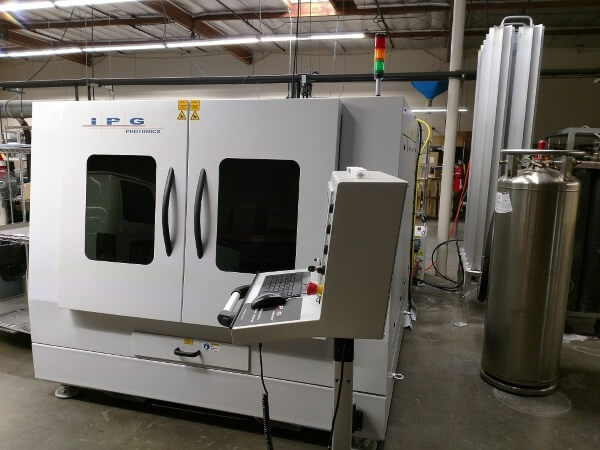 The new laser cutting system in place at Jimani

IPG promotes their Laser Cube as a small parts cutter. I think that description is partly what attracted me to the machine. It appears to be very well built but only has a 4 foot X 4 foot cutting bed. Jimani’s job shop laser marking business consists mainly of marking and engraving small to medium sized runs of small parts. That is exactly what I am hoping that our job shop cutting business can develop in to.

We have not tried to solicit business up to now because I wanted to feel more comfortable with the equipment. I was a bit discouraged last week because we do have a potential cutting customer and one of his requirements is .088” diameter holes thru ¼ inch thick aluminum. I was struggling with clean .088 Inch diameter holes. Although we are very familiar with the fiber lasers used in marking applications, a 3KW fiber cutting laser is very different from a 50-watt fiber marking laser, and there is a completely different set of interactions between laser and material. Well, I got those .088” holes dialed in, and I’m ready for the next challenge. Although the basic laser cutting settings included in the IPG Tech Tables resident on the machine seem to be great for a lot of materials, I think that I’ll simply be on my own for some things and that’s OK. I think that is called experience. More to follow.