It’s been about a year and a half since we first introduced the Low Cost Hybrid Fiber Laser Marking System. For any readers that are not familiar with this system, it was first announced in one of our blog posts in September of 2016.

We’ve learned a bit more in those 18 months and we’ve sold quite a few of these systems in various configurations. Any issues we have had to address have been very minor and user satisfaction has been extremely high. We are now getting repeat orders from first time users and, to me, a repeat order is the strongest compliment that we can receive about anything that we sell.

We still use, and have no intention of changing from, the GalvoTech Scanbox scanheads. Those have also performed flawlessly with both 163 mm and 254 mm focusing lenses. The emergency scanhead that I purchased for customer support is still in the box having never been opened or needed and is just gathering dust.

We had a few complaints from users about Z axis “creeping” in the workstation. The laser mounting platform on the Z axis mast is attached to the Z drive mechanism with a threaded nylon block held in place by a set screw. Whether thru wear or a loose set screw, the Z axis at times could creep as much as .015 inches or so and that creep was just enough to move the focusing lens out of its optimum focal point. Tightening the set screw would alleviate the problem but only temporarily. 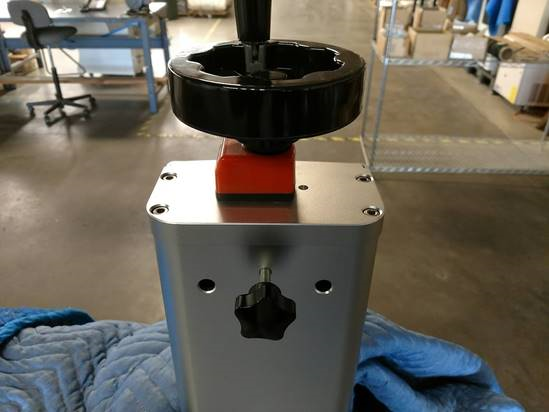 Workstations now come with a Z axis “lock” in the form of a knurled thumb screw which can lock the lead screw in place once it has been positioned correctly. Problem solved!

We’ve also increased the height of the Z axis mast by 2 inches and added a digital position counter on top of the mast to assist in repeating accurate Z axis positions. These things are now standard features on all new Low Cost Hybrid systems.

Although we have avoided building custom configurations of these systems, we have added some standard options than have been very useful. We’ve integrated the same Sherline manual X-Y tables and Rotary Indexers that we use on our Langolier family of Fiber Laser Marking Systems into the Hybrid as shown in the photo below of a completed Hybrid being prepared for shipping. 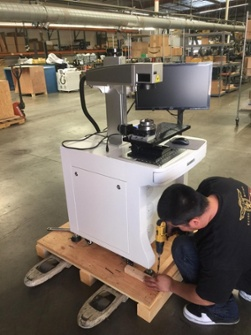 New, first time users always have a concern about training and getting started. Although we offer a day of factory training at Jimani, most new customers don’t want to take the time or bear the expense of sending someone to Jimani. We install Team Viewer on every system computer and we’ve had remarkably good experience doing on line training with the user’s actual computer and marker. One Team Viewer session seems to be the norm but it really depends on how sophisticated a user wants to be. We haven’t charged for support time nor do we intend to.

All in all, we’ve been pleased with everything about the Low Cost Hybrid system project. It has turned out to be a good, solid product. We know now that we have an excellent Chinese partner in Ryan Wang of Focus Laser. Ryan is onscientious and honest and has done every single thing that he told us he would do. I think that introduction this product was a wise thing for us to do. We’re looking forward to another successful year.